The Miller Center for the Performing Arts at Reading Area Community College, long recognized as one of the premier performing venues in the Mid-Atlantic Region, is proud to announce a phenomenal 15th Anniversary Season led by Americana legend Mary Chapin Carpenter on August 16th. (Very limited tickets remain for the Mary Chapin Carpenter concert.) Tickets are on sale now, https://millercenter.racc.edu/mary-chapin-carpenter 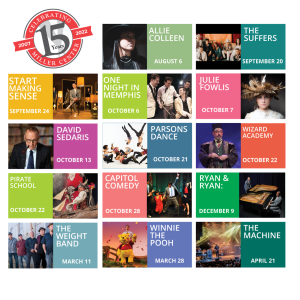 “We are very proud to bring a unique, varied and diverse schedule of spectacular entertainment options for our patrons in Eastern Pennsylvania,” said Tony DeMarco, Executive Director of the Miller Center and Vice President for Advancement at RACC.

The Miller Center season kicks off on August 6th with emerging Country artist, Allie Colleen. Allie’s first singles, Playin ‘House and “Ain’t the Only Hell My Momma Raised” are in constant rotation on Country Radio Stations throughout the United States. Allie has a very interesting background with a legacy of legendary music in her family. Tickets are on sale now, https://millercenter.racc.edu/allie-colleen

High energy Gulf Coast Soul Band, The Suffers, are exploding onto the popular music scene bringing Rock & Roll, Funk and Classic American Soul to stages all over the world. The Suffers hit the Miller Center stage on September 20th. Tickets are on sale now, https://millercenter.racc.edu/the-suffers

Fans of the Talking Heads will want to make plans immediately to see “Start Making Sense”. The Start Making Sense concert will be a 15th Anniversary Signature event on Saturday, September 24th. The Miller Center will have a number of local artists performing leading up to the big concert. Frog Hollerone of Berks County’s favorite Americana, Country-Rock banks, will open for Start Making Sense. There will be food trucks, face-painting and a carnival-type atmosphere outside in the Courtyard adjacent to the Miller Center all afternoon starting at 3pm including live outdoor entertainment. Tickets go on sale July 15th.

The ghosts of Elvis, Johnny Cash, Carl Perkins and living legend Jerry Lee Lewis will come alive on October 6th with the Broadway smash, “One Night in Memphis” coming to the Miller Center Stage. “One Night in Memphis” captures the magical evening at Sun Studios in Memphis when the four iconic performers gathered for one time only. Tickets go on sale July 15th.

Miller Center House Manager, Megan Schappell, has developed a cost-effective ticket package that will enable the Miller Center attendees to save considerable dollars while attending multiple shows. The “Build Your Own Miller Center Series”Will be a“Buy Four, Get the Fifth Show for FREE ” opportunity for fans of the performing arts. “We want to introduce flexibility to our audience members while encouraging fans to try new shows and new genre’s.” Schappell proudly states, “There is never a bad show at the Miller Center!”

Irish Folk Artist, Julie Fowliswho sang Touch the Sky and Into the Open Air from the Disney Smash Movie “Brave”, brings her beautiful Gaellic vocal stylings to the Miller Center on October 7th. Tickets are on sale now, https://millercenter.racc.edu/julie-fowlis

David Sedaris will be coming back to the Miller Center on October 13th. With sardonic wit and incisive social critiques, David Sedaris has become one of America’s pre-eminent humor writers. The great skill with which he slices through cultural euphemisms and political correctness proves that Sedaris is a master of satire and one of the most observant writers addressing the human condition today. If you love David Sedaris’s cheerfully misanthropic stories, you might think you know what you’re getting into at his live readings. You’d be wrong. To see him read his own work onstage allows his autobiographical narrative to reveal a uniquely personal narrative that will keep you laughing throughout the evening. Don’t miss this event, tickets will go fast! Tickets go on sale August 5th at 10am.

Contemporary Dance sensation, Parsons Dance Companywill be coming back on October 21st to the Miller Center after being the first dance performance inside of the Miller Center 15 years ago! Parsons Dance is a modern dance company, internationally renowned for creating and performing contemporary American dance of extraordinary artistry that is accessible and enriching to diverse audiences. Tickets go on sale August 12th.

On October 22ndDavid Engel will be taking us to Pirate School and Wizard Academy. At 1pm, set sail for an incredibly successful program with “Pirate School!” During “Pirate School!” kids learn the finer points of mischief and become “good pirates” cooperating and carousing together while getting the chance to live out their dreams of the Golden Age of the Buccaneer!

At 4pm the Miller Center will transform into a Wizard Academy. Join this loony professor of Wizardry as he leads children on a zany day-in-the-life of a ‘Wizard In Training’ (WIT). During “Wizard Academy!” children will have their brain, eyes and reflexes tested with fun challenges and illusions, and stir up the primal forces of their imaginations with instruction on potions, wand etiquette, and levitation. Kids encouraged to attend dressed in costume for both shows and will go on sale July 22ndnd.

Capitol Comedy is a performance group that uses the winning formula of musical comedy, multimedia animation, and political satire to engage audiences in an entertainment that is hilarious, insightful and non-partisan. This new show takes on the Biden administration with songs and sketches poking fun at everything from diversity-driven decision-making to dog training to dumping dollars on the electorate. Capitol Comedy is coming on October 28th and going on sale July 29th.

Father and son piano due, Ryan & Ryan will be bringing the holiday cheer with their “Merry & Bright: Songs of Christmas Cheer”Show on December 9th. Ryan & Ryan is a proven hit with audiences of all generations. Their inventiveness, infectiousness, skill and general joy of life make for irresistibly engaging performances. To sum it up, they make music that inspires. Tickets go on sale September 16th.

On March 11th The Weight Band will be performing original songs as well as classics of The Band. They are led by Jim Weider, a 15-year former member of The Band and the Levon Helm Band. The Weight Band originated in 2013 inside the famed Woodstock barn of Levon Helm. Weider was inspired by Helm to carry on the musical legacy of the Rock and Roll Hall of Fame group. Tickets go on sale September 23rd.

The acclaimed, record-breaking run of Disney’s Winnie the Pooh: The New Musical Stage Adaptationcreated and directed by Jonathan Rockefeller, will be arriving in Reading on March 28, 2023. The celebrated show for families of all ages, will bring Pooh, Christopher Robin, and their best friends Piglet, Eeyore, Kanga, Roo, Rabbit, and Owl (and Tigger too!) To Reading, with performances running on March 28, 2023. Tickets go on sale July 15th.

Fan favorites, The Machine will be back April 21st! The Machine has forged a 30+ year reputation of extending the musical legacy of Pink Floyd. The New York-based quartet performs a diverse mix of The Floyd’s extensive 16-album repertoire, complete with faithful renditions of popular hits as well as obscure gems. Tickets are on sale now, https://millercenter.racc.edu/the-machine

The Miller Center for the Arts, located on the campus of Reading Area Community College, has become an anchor in the city of Reading’s cultural landscape. Our 500-seat theater offers quality programming for all ages and interests. Whether you would like to see modern dance, improve comedy or a children’s show, the Miller Center has something for everyone.

Some of the more prominent acts that have appeared at the Miller Center include David Sedaris, Judy Collins, New York Gilbert and Sullivan Players, Three Dog Night, The Machine, Tom Papa, and Josh Ritter. Please view our full list of shows for more details on the current season.

Along with performances, the Miller Center also hosts community events and is available for rental. For more information on how we can accommodate your event, please contact Megan Schappell, [email protected] or 610-607-6205.