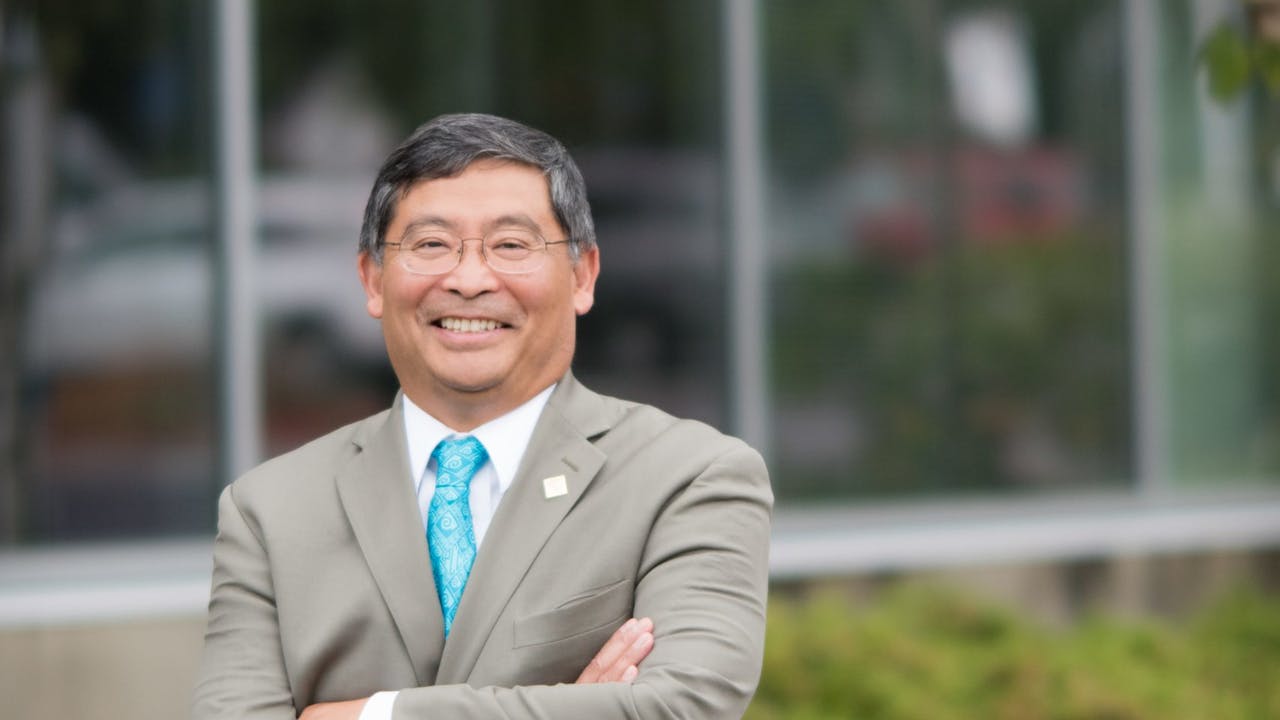 Mark MitsuiMark Mitsui remembers the shock he felt the first time he heard about it. His mother and father and their families were forced from their homes in Washington into World War II Japanese “internment camps.” His mother, Tami, was sent to Wyoming – his father, Sam, to California.

While enroute, Tami’s family of nine were clustered into a horse stall at a livestock expo in Portland, Ore. They were kept there for three months before moving on to Heart Mountain. She says the overwhelming smell of manure still lingers in her memory.

Eventually Friday, Tami and Sam would go on to attend the University of Washington, where they met and eventually passed along to their children a passion for education and justice.

Tami was able to see her son become president of Portland Community College (PCC) some 60 years later – from concentration camp to college president in one generation.

“For me, really, it underscored the importance of higher education,” says Mitsui.

Mitsui is now retiring, ending a 40-year career in higher education with a legacy of service. He was deputy assistant secretary for community colleges under President Barack Obama, worked as faculty and administration, serving as president of two West Coast community colleges. Mitsui’s life mission has been laser-focused on helping minoritized, first-generation, and low-income students improve their lives through education. Colleagues called him a “north star,” a leader whose aim was so true he will guide them long after he leaves in June.

Mitsui says he always knew he wanted to work in education. After earning his bachelor’s degree in physical education from Western Washington University, he took a teaching job at Renton Technical College. He worked eight years there.

Mitsui says he has noticed many of his students struggling with basic insecurity needs, unable to access food and housing. He says he came to understand that having one’s basic needs met was, in his words, a “prerequisite to completing college.”

Mitsui earned an M.Ed. in educational leadership and policy studies from the University of Washington, and by 2006, he was vice president of student services at South Seattle Community College. He helped the institution become one of the first six Asian Native American Pacific Islander Serving Institutions (AANAPISIs) shortly after the Minority Serving Institution (MSI) designation was created in 2007.

“Becoming an MSI, and the value of funding in introducing culturally relevant curriculum, pedagogy, faculty that reflect the student body – when students’ lives could become the text or be part of the text – how life-changing that can be,” says Mitsui. “When you see yourself reflected in front of the classroom, and have someone who gets it, that’s really powerful. That was the AANAPISI experience for me. ”

In 2010, Mitsui became the president of North Seattle Community College, where he took on the Opportunity Center for Employment and Education, a project started by its previous leader to organize funding and wraparound resources not only for students but all community members in need. Witnessing and experiencing the efficacy of bringing everything together under one roof had a big influence on Mitsui.

“It brought the college, community-based organizations, and state agencies together into the same building, and then cross-training occurred so that case managers and financial aid advisors began to understand each other’s programs and funding streams,” says Mitsui. This “braiding” of funding created a lot of foot traffic on campus, he says.

As more locals came by to access food stamps, Temporary Assistance for Needy Families (TANF), Section 8 housing, and other funding, they began to see themselves as potential students, according to Mitsui.

“Because it was on campus, they saw themselves going to college. And so, students would start enrolling and graduating, ”he says. “I remember more than one student came in with housing insecurity and two years later graduated with an associate degree and went into a field with a living wage.”

Mitsui and his team at North Seattle continued to advocate for low-income Asian American Pacific Islander (AAPI) students, and the work caught the attention of the Obama Administration. After co-sponsoring an AAPI initiative event with the White House, Mitsui was offered an appointment with the US Education Department. He declined, as North Seattle was at the end of its accreditation cycle.

But the White House was willing to wait. In 2013, Mitsui and his family packed their belongings in their Nissan Altima and drove to Washington, DC. His experience there, he says, was “eye-opening.” He began to get a sense of just how many resources were available to community colleges that he did not know about, and he wanted to get the word out.

He pulled together an interagency group and organized a convening for MSI community colleges’ representatives to meet in the district with federal agencies, sometimes in “speed dating” scenarios, to learn about all the unique grant opportunities that could help their students.

When Mitsui returned to the West Coast in 2016, this time as the president of PCC, the data and policy he worked on in Washington, DC, helped him in the creation of Pathways to Opportunity, statewide communities of practice that identify public benefits, how they can fit together, and how they can wrap around and bolster community college students.

Through Pathways to Opportunity and Mitsui’s ability to network, the Oregon legislature passed House Bill 2835 on June 17, 2021, to create a benefits navigator role for every public college campus in the state.

Mitsui’s latest advocacy work helped with the creation of a $ 200 million state investment package, called Future Ready Oregon. It will support the education and training of historically underserved communities for family-wage careers.

“It’s unheard of to have that level of funding in closing workforce gaps,” says Kate Kinder, state strategies director (West) at the National Skills Coalition. She and Mitsui worked closely together on the Pathways to Opportunity project. “[President Mitsui’s] willingness to collaborate and work with diverse partners to impact the lives of students at his institution – what a great way to end his tenure at college, a legacy for Oregon. ”

Making the decision to retire, especially in the middle of so many equity-centered projects, was not an easy one. But Mitsui told himself he did not plan on working past the age of 65, and he intends to follow through.

“I want to leave while I’m relatively healthy and spend time with family, see the world, and not focus on work so much, as meaningful as it’s been,” says Mitsui. “And I want to sit down and write a family history. My mom is still alive, and I want to spend more time with her. ”

Mitsui says he will dearly miss engaging with his students daily, and his colleagues, who say Mitsui has inspired them.

“He’s just so approachable and lovely,” says Pam Hester, regional director of Community Workforce Development at PCC. “He takes time to get to know people and connect, even though you know he’s so busy and got his eye on so many things. He knows what’s important in life, which is the people. ”

Kinder says Mitsui has never swayed from his mission, possessed by a “clear focus” on “equity and serving students who had not been served well by the higher education system.”

“President Mitsui has such a clear vision and ability to center the student, their individual life and their family and goals, and connect it to policy,” says Kinder. “When there was any advocacy effort that needed to happen in Salem, he was all in and would be there – he was happy – he just would really engage in that capacity. And I think he has a really great sense of humor and stays really calm. I learned a lot just from watching him. ”

In the dark days of 2020, after the onslaught of the pandemic, the murders of George Floyd, Breonna Taylor, and Ahmaud Arbery, the social unrest in Portland and surging wildfires, Hester says Mitsui created space for the community to come together, lean on each other, and stay resilient.

“He gave us space to be human,” says Hester. “He can always see the most important picture, the students, and how it’s all connected to all these other members of our ecosystem who are so important.”